Originally this list was going to have only ten, but in a country with hundreds of fortifications, that was impossible. So here’s a selection of the 20 most impressive castles and fortresses around Portugal, many built over a millennium ago by the Moors, others between the 12th and 15th centuries to defend the country from invasion by the other Iberian kingdoms which later formed Spain. Many are more imposing than beautiful, but all are remarkable. Most are ruins or shells of formerly magnificent constructions, but a few have been restored to become hotels or museums. 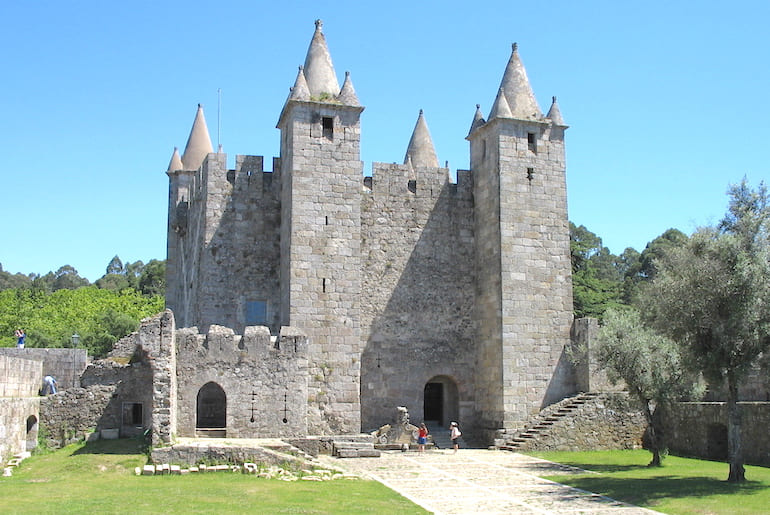 This is one of the most complete medieval monuments in the country. It’s a fairytale castle crowning a hill in the town of Santa Maria da Feira (located about a half hour from Porto), built in the 11th century, redesigned in the 15th, and one of the very few that have been beautifully restored in the last few decades. 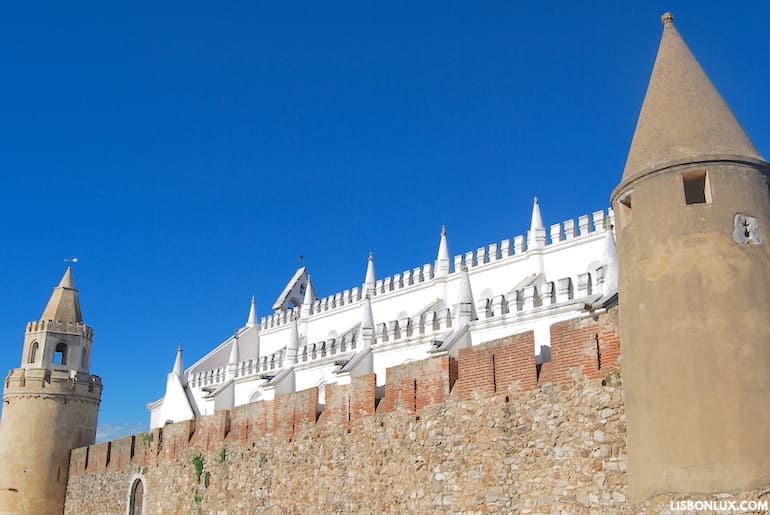 The Alentejo province is known for its sleepy villages, but Viana do Alentejo is more than sleepy — it’s on the verge of becoming a ghost town. It doesn’t even come featured in most guidebooks, despite having one of the most attractive castles in the country. It was carefully restored in 2010, so hopefully it will begin to attract visitors who go off the beaten path. Built in 1313 with cylindrical towers, it’s one of the most remarkable constructions of the late-Gothic period in Portugal, including a church inside the walls with a beautifully-carved Manueline portal. 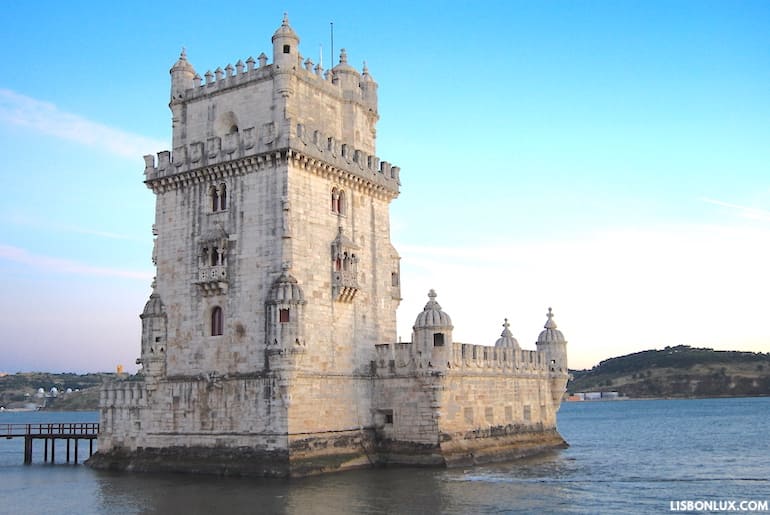 This beautiful fortress is an architectural masterpiece, featuring ornamentation never seen in a building with military purposes. Its elegant balconies look out to the Tagus River at the departure point of the voyages of Vasco da Gama and other Portuguese explorers. 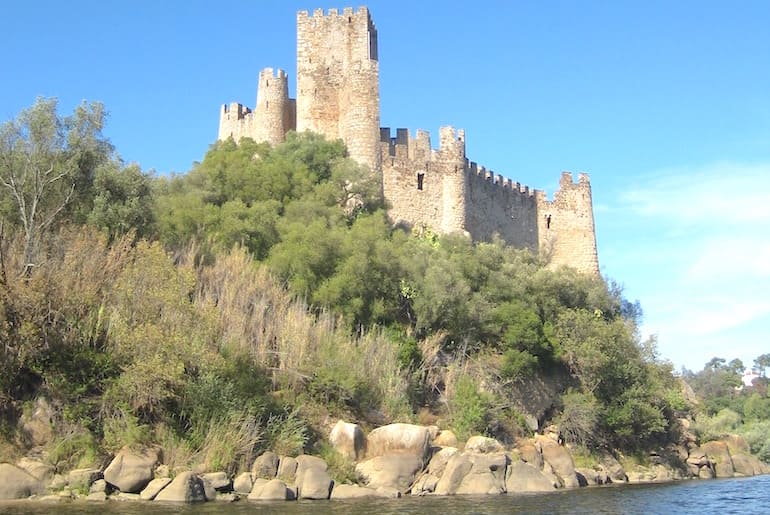 There are several legends about this enchanted castle, including one that says it's haunted by a princess. Its foundations are Celtic and Roman, but it was rebuilt by the Knights Templar in 1171. Eighteen meters (60 ft) high and with nine towers, it stands in the center of a small island in the middle of the Tagus River, surrounded by a romantic atmosphere. 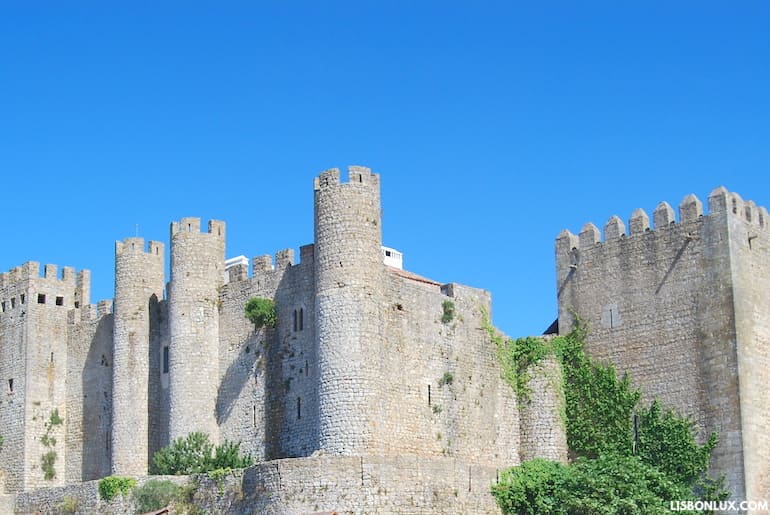 This Moorish castle was redesigned in the 12th century and is one of the few that haven't become a ruin. That’s because it’s now a very romantic hotel, and the village which it surrounds is one of Europe’s prettiest and best-preserved, naturally attracting thousands of visitors. The castle features cylindrical and square towers, and includes the former mayor’s mansion with Manueline windows, now part of the hotel. 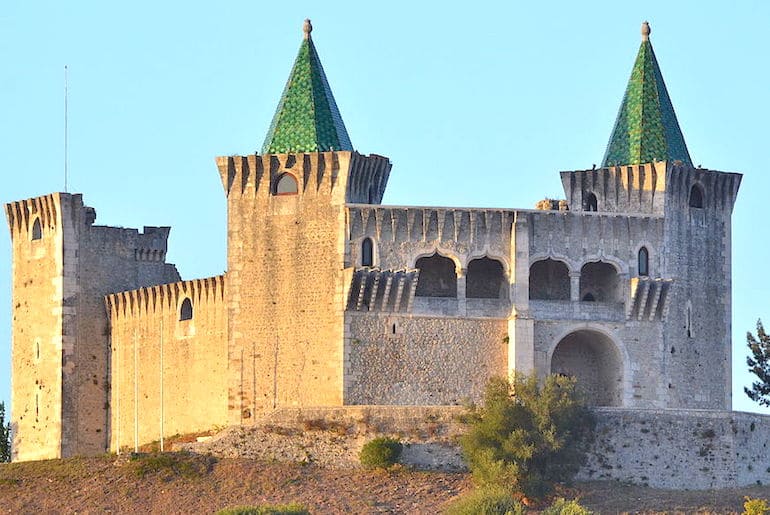 Built by the Moors and restored several times by the Portuguese kings over the centuries, this castle stands on a hill above the small town of Porto de Mós. It features green cone-shaped turrets and an elegant loggia added in 1420. 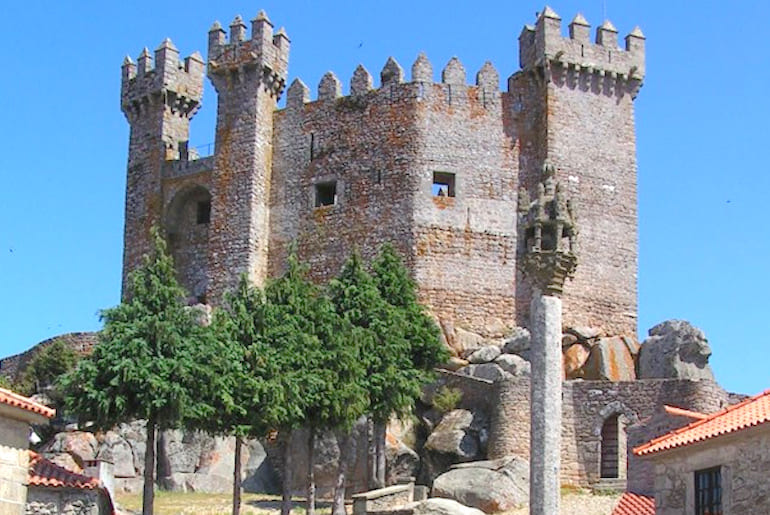 This charming little castle perched on rocks is found in a small town in the north of the country. Over one thousand years old, it was mentioned in a medieval tale of twelve Portuguese knights who went to England to compete in honor of twelve English ladies. The interior is empty but there are wonderful views from the walls. 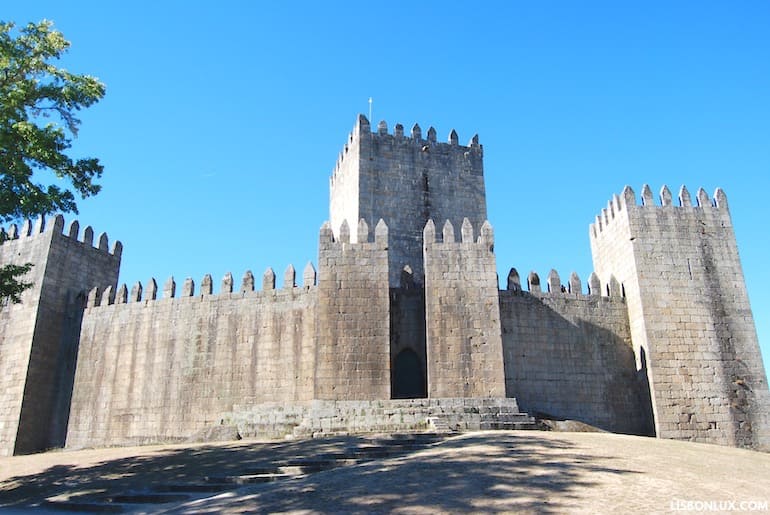 Symbol of the foundation of the Kingdom of Portugal in the 12th century, this castle in the country’s first capital (the beautiful city of Guimarães) has eight crenellated towers. It is said that it was here that Afonso Henriques (Portugal’s first king) was born, and the small Romanesque church next to the castle is where he was baptized. 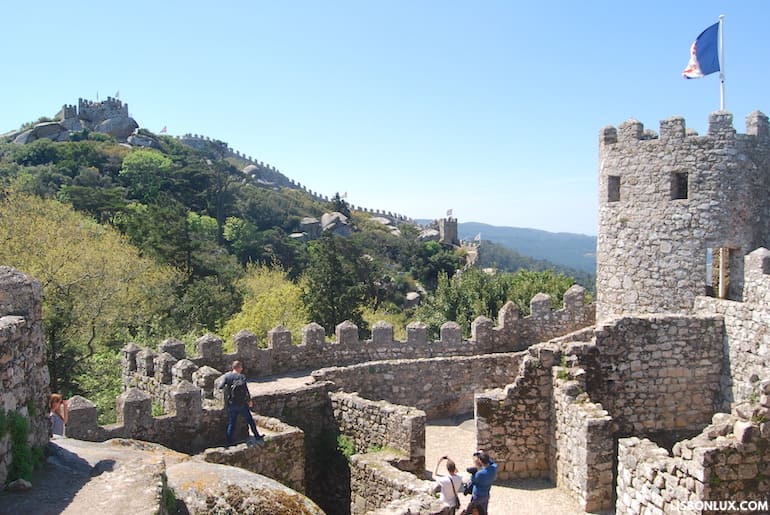 The walls of this castle climb Sintra's hills through massive boulders. It has a total of five towers and offers wonderful views from the ramparts. Built in the 700s, it includes an old cistern and a romantic park. 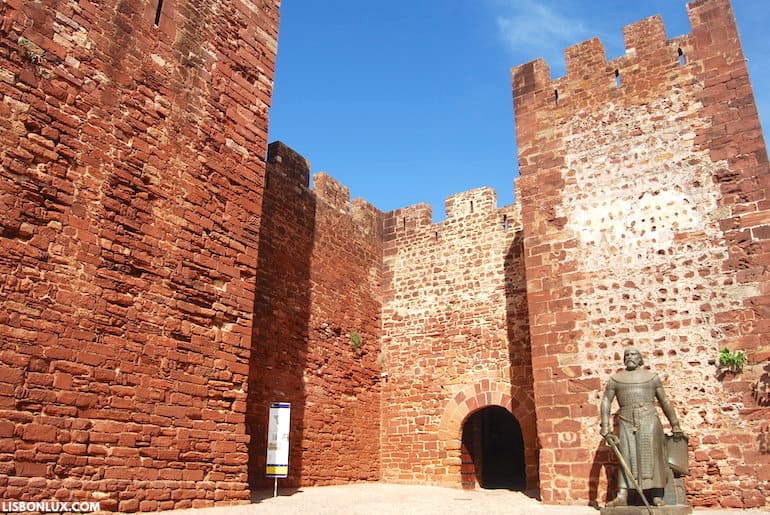 The first fortifications built in Silves were by the Phoenicians, then came the Romans and finally the Moors, before King Afonso III conquered the city and restored the castle. There are wonderful views of the countryside from the red sandstone walls which also surround an impressive vaulted medieval cistern. 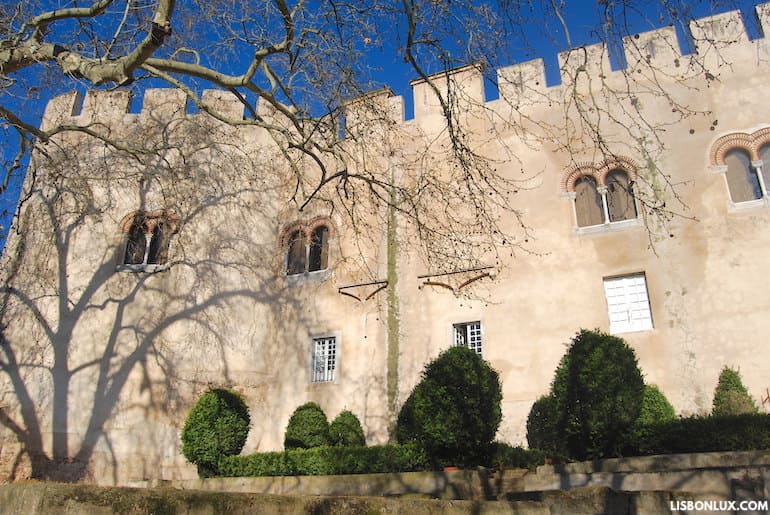 Built in 1482 in the sleepy little town of Alvito, this was the residence of a nobleman but can now be home to anyone who books a room in it. It was restored and turned into a hotel of the Pousadas chain in 1993, and the façade and courtyard feature Manueline and Moorish windows. 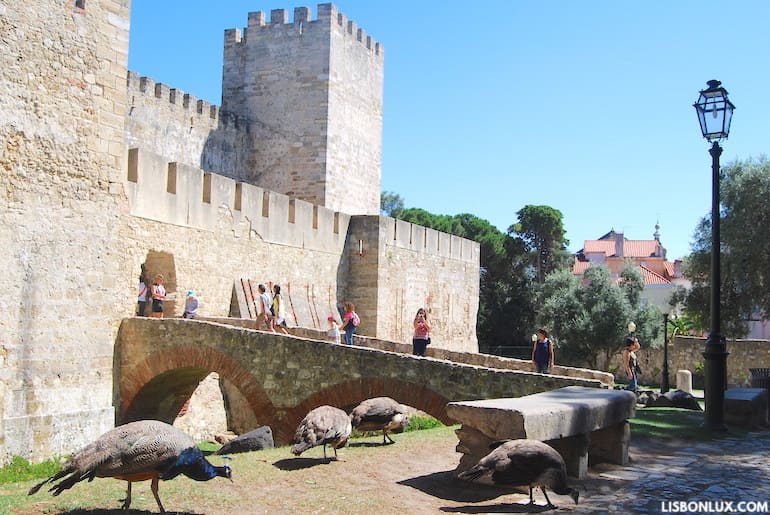 Built by the Moors, the walls and eleven towers of this castle were restored in the 20th century. It's one of the most visited monuments in the country, with the biggest attraction being the breathtaking panoramic views of the capital. 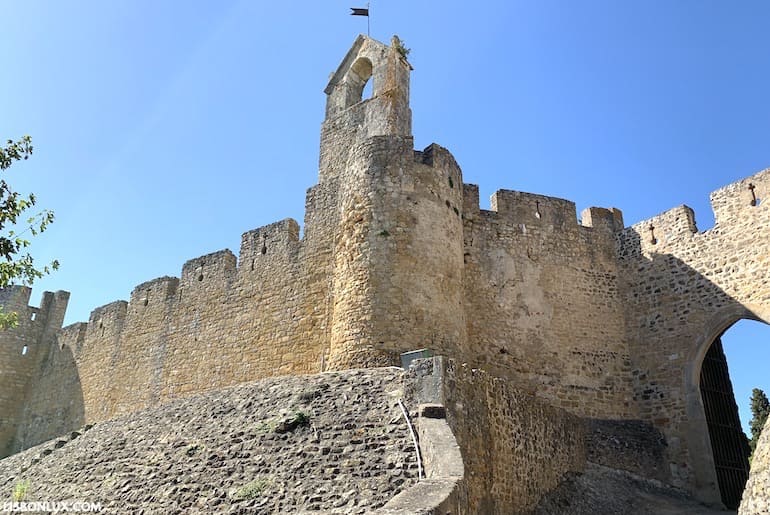 This castle of the Knights Templar is one of the most impressive monuments in Portugal, as it incorporates the Convento de Cristo, a masterpiece of Manueline architecture classified as World Heritage. 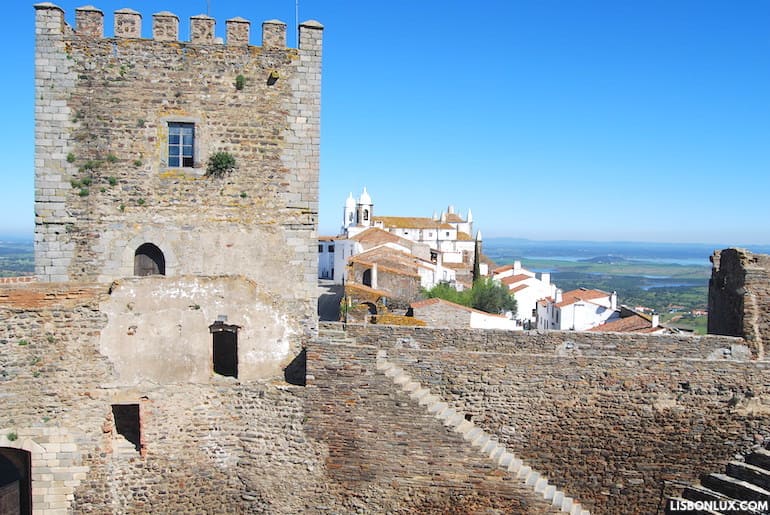 This castle comes with a tiny medieval village inside. Built in the 13th century, its walls surround incredibly pretty homes, all painted white. Everywhere you turn are gothic doors and arches, and there are breathtaking views all around, especially from the courtyard arena. 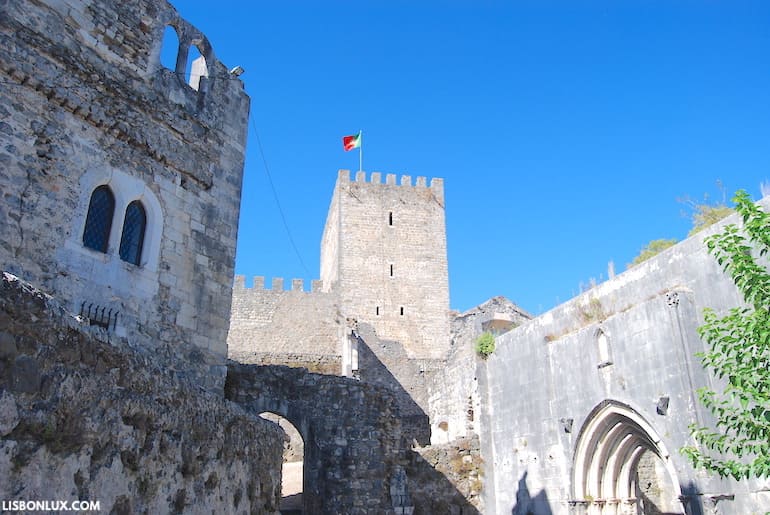 This castle crowns the city of Leiria and served as a royal residence in the 14th century. Mostly Gothic in style, it offers views of the town below from an elegant loggia. 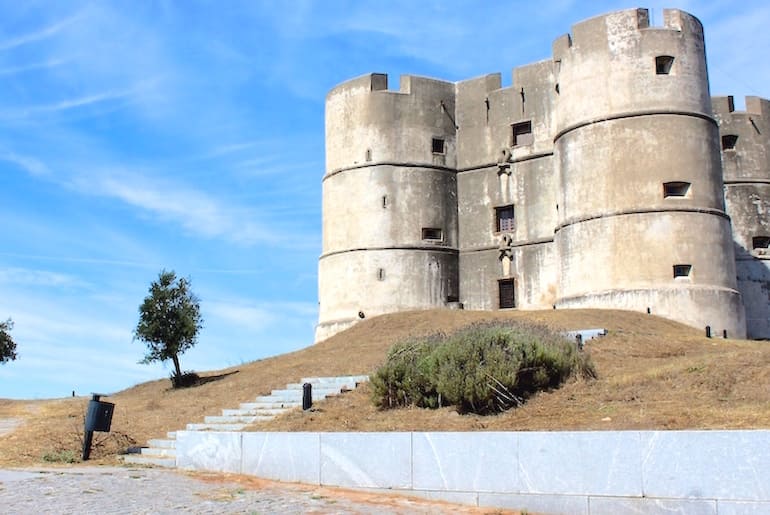 Found in the center of a typical Alentejo town, this 12th-century castle is surrounded by knotted “ropes” that symbolize the Bragança royal family. There are vaulted rooms inside, and it mixes the Gothic, Renaissance and Manueline styles. 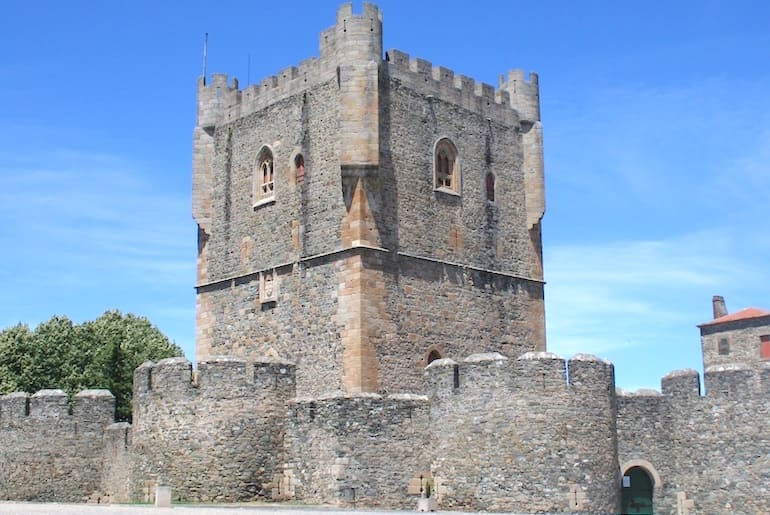 Built in 1187, this castle features Gothic windows and a tower known as “Princess’ Tower” for having been the prison of the wife of a duke who accused her of adultery and later had her murdered. In another tower is a small military museum, while next to it is a medieval pillory standing on an ancient stone pig used in Celtic fertility rites. 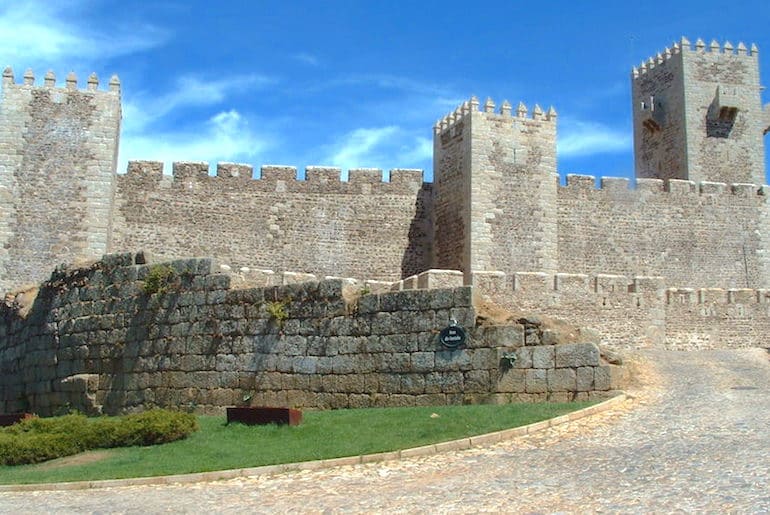 This majestic castle has an austere beauty, with an unusual five-sided keep and an interior featuring vaulted ceilings adorned with shields. 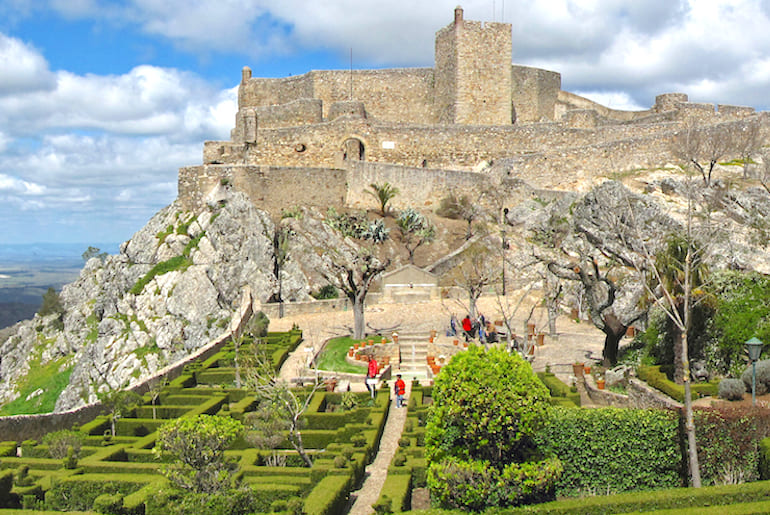 Built in 1299 on a site of incomparable natural beauty, this castle includes two cisterns and a small museum displaying weapons. However, the biggest attraction is the spectacular medieval village that it surrounds. 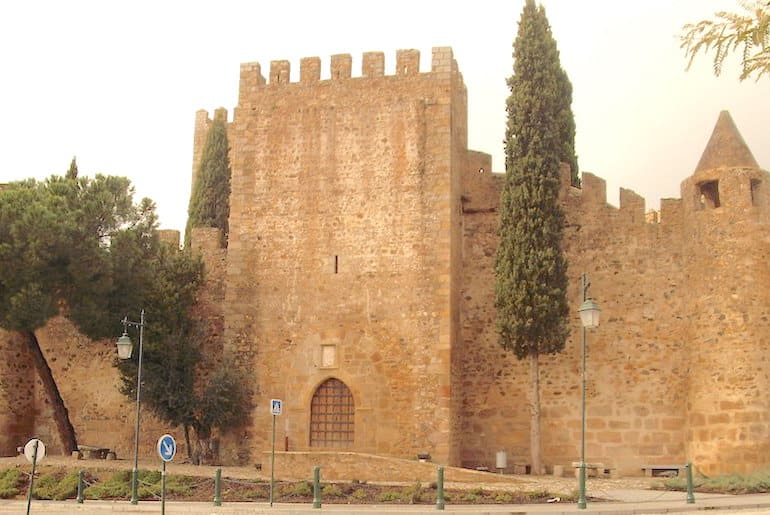 This medieval castle (built in 1359) has a Gothic portal, three rectangular towers, two cylindrical towers and a 44-meter-high keep. It's now one of the best-preserved examples of medieval architecture in the country.